2020 Charitable Giving: We are a Nation of Givers

Collectively, we are doing more, giving more, and praying more.

When faced with uncertainty and a worldwide crisis, people are responding in these three ways.  In 2020, we’ve helped our neighbors, increased our charitable giving, and prayed more than ever before.

Increased restrictions on gathering together have made traditional volunteering opportunities trickier this year. Jeannie Sager, the director for Indiana University’s Women’s Philanthropy Institute (WPI), says that social distancing  “made a really big difference in how we engaged in generosity.” 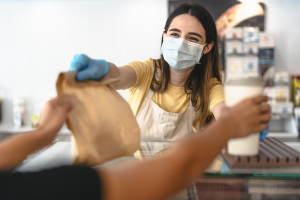 When shelter-in-place orders began to be issued, she says that people became more aware of the needs of community members close by. Wanting to help neighbors and local businesses who were struggling, they bought groceries and offered other assistance to their most vulnerable neighbors, she says. WPI research showed that during the early months of the pandemic, 56% of US households engaged in some kind of charitable giving to help their neighbors

People also considered other ways to help support local businesses going through tough times. Ordering takeout from local restaurants, continuing to pay for services or memberships that could not be used during shelter-in-place orders, and purchasing gift cards from local boutiques were all ways in which they chose to do something in their communities.  Although the support wasn’t considered charity, it was considered a lifeline by many businesses who received it.

Lawson Bader, the president and CEO of DonorsTrust, says that 2020 may be “the greatest giving year ever.”

In fact, we are on track for that. Charitable giving in the first half of 2020 rose 7.5% over the first half of 2019, according to the Fundraising Effectiveness Project.  The second quarter of 2020 also marked a five-year high in the number of donors and contributions. Despite the economic insecurity of the coronavirus recession, people in the U.S. continued to donate.

In an article for Kiplinger, Bader says that “the COVID pandemic is proving that we are a nation of givers…It appears that donors recognize the rainy day they’ve been waiting for is here and understand the importance of giving now more than ever.”

Despite higher standard deductions resulting from 2017’s Tax Cuts and Jobs Act (TCJA), he notes that charitable giving has increased. This was no surprise to Baden, who says ” I wholeheartedly believe that, while nice, tax-incentives are not the primary driver for donors.”

“Americans inherently want to do good,” he says, ” And that’s happening during the COVID crisis, showcasing why we are the most charitable people in the world.”
Asha Curran, co-founder and CEO of the GivingTuesday organization, can also attest to the wave of giving that is happening. This year, the GivingTuesday 2020 movement inspired 39 million people to participate. They collectively gave over $2 billion to charities of their choice, an increase of 25% over 2019.

“This groundswell of giving reaffirms that generosity is universal and powerful, and that it acts as an antidote to fear, division, and isolation,” says  Curran. 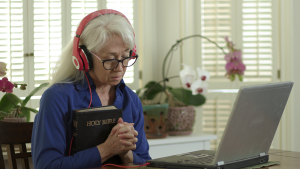 A headline in The Telegraph proclaims “Pandemic prompts surge in interest in prayer, Google data show.”

Research conducted by Jeanet Sinding Bentzen, an associate professor of economics at the University of Copenhagen, showed a 50 % surge in online searches for prayer in the first half of the year. In March 2020, the share of Google searches for prayer surged to the highest level ever recorded, surpassing all other major events that otherwise call for prayer, such as Christmas and Easter.

Bentzen says that it is natural to turn to religion to cope with feelings of anxiety and hopelessness. “In times of crisis, humans have a tendency to turn to religion for comfort and explanation,” she says. The theory is called religious coping, and the 2020 Covid-19 pandemic is no exception.”

Dr. Peter Saunders, the CEO of the International Christian Medical and Dental Association, has spoken during the year about finding purpose in this pandemic. A silver lining that he has noted is an increased number of people exploring the church.

Pre-COVID, he says that only about 6% of people in the UK went to church on Sundays. During a CMDA podcast in May, he said “Twenty-five percent have dipped into some kind of Christian church service since lockdown began,” he said. “We’re just praying that God will use this opportunity… of people asking lots of big questions about life and death and eternal purpose and meaning…. It is an opportunity for the Gospel, I think.”

2020 has presented the world with many challenges. But, as is often the case, “obstacles are often opportunities in disguise.”

MedSend CEO Rick Allen says that, if you look, you will also see sacrifice, heroism, and commitment.

“In the middle of a global pandemic, we continue to receive applications from well-trained and prepared Christ-following healthcare professionals,” he says. “We are seeing people make intentional decisions to either go or stay and serve in Christ’s name. They are choosing to serve in difficult and dangerous locations where the pandemic is just one more thing to battle and pray through.”

Caitlin Lawrence, a MedSend grant recipient serving in Bolivia, told us that it never crossed her mind to leave. She  believes that the Lord gave her the talents and the training to help, and says “He’s put me here for such a time as this.”

She and over 250 other MedSend grant recipients are embracing many obstacles, which include more than just the coronavirus. The crises that they see on a daily basis provide them with a great opportunity: they share the love of Christ while providing compassionate healthcare in the poorest areas of the world.

Allen says, “Our donors have protected the life-giving ministry of these individuals by providing MedSend the resources needed to keep them serving. 2020 has been challenging, but it has also been inspiring. Thank you for your support in making this year like no other!”

Let us pray for the ability to discern how God wants to use each of us during this time – whether it is doing more, giving more, or praying more.

“Therefore, as we have opportunity, let us do good to all people, especially to those who belong to the family of believers.“ Galatians 6:10