Hope Against All Odds

Post written by Rachel B., in a report from the field

“May* arrived on the female ward as the skinniest person I have ever seen,” remembers Rachel.

The exception was May’s abdomen. It was stretched to the point that it might surely burst—as if she were pregnant, far beyond the point of delivery. Rachel B., a MedSend nurse serving in the 10/40 window, was shocked by May’s slim figure.

“I could easily encircle her arm with my fingers,” she recalled about her patient’s wasted frame.

May was from a marginalized tribal group in South Asia, meaning that her family had few financial resources for treatment, and that the chance for her receiving good care was slim. Healthcare in this area is very expensive. But as her situation progressed into its most desperate, her family scraped together what they could, and came, as a last-ditch effort, to seek treatment at the Christian hospital.

It was a tumor that had caused the extreme distension of May’s belly. She could only sit upright for a couple of minutes, and could not lay all the way flat—the tumor pressed too hard on her lungs and her other organs. Her legs were swelling from the backup of fluid and she could no longer support her own weight to stand or walk. The situation was desperate. Surgery was scheduled quickly—but due to her low blood levels, there was a waiting period.
In the meantime, Rachel and her team explained to May’s family what was happening… in the simplest way they could. The team recognized that they were launching into the unknown—they only had an X-ray to clue the surgeons in about what was going on inside of May’s body. By contrast, in the US, there would have been a CT scan or an MRI to determine if the tumor was invading or wrapping around anything else.

The morning of surgery, Rachel, standing with the surgeons and the anesthesiologist, prayed over May. Their most fervent prayer was that the tumor wasn’t wrapped around everything. If the tumor had invaded much of her internal organs, the surgeons would have to sew her back up and send her home to die.

Forty-five minutes later, the team removed a 40-pound tumor. To all of their amazement, the mass was hardly attached to anything at all! The surgery could not have gone more smoothly.

For May, the procedure was miraculous. For the medical team, it was an answered prayer. 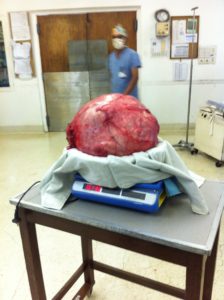 The surprising size of May’s tumor.

A week after the surgery, Rachel was chatting with her colleague. She shared the story of May, and began to talk about the ordeal May and her family went through to get to her successful surgery. It included a visit to another doctor who had told the family that he could treat her, but the surgery would cost an exorbitant amount of money. Unable to pay the high medical fees, the family had taken her home, because they had no way to raise the funds.

At first, Rachel was focused on the way in which the other doctor treated May’s family. But her colleague interrupted her:

“Do you remember that you called me and asked if, since this lady was from the same tribal group I’m working with in translation? [You asked] whether the recording of Mark was ready?” she urged. “Because you had no staff who spoke with language well enough to share the Gospel with her?”

“Yeah,” Rachel replied, knowing there was more to this line of questioning.

“And do you remember that a year ago, we hadn’t finished the translation of the gospel of Mark—the first book of the Bible EVER translated into their language—much less had we recorded it?”

And in that moment, Rachel finally recognized God’s timing. Humanly speaking, May was days or weeks away from dying. But with God’s timing, she had actually come at the perfect time. If May had come earlier, Rachel would not have been able to upload the recording of the entire gospel of Mark for May in her language. If May had not had not received the compassionate care while at the Christian hospital, May and her daughter might not have been as eager to listen to the recording themselves (as they enthusiastically to Rachel), but also to take it back to their village.