Working as a surgeon at Tenwek is difficult. Our patients often wait to seek treatment until the illness or disease has been going on for some time or until symptoms become unbearable. The advanced state of disease makes it less likely we can do much to help, or when we can, makes operating more difficult. Patients are commonly malnourished, and any surgeon will tell you that that impacts surgery and makes patients less likely to heal and more likely to suffer complications. We don’t have the same options for diagnosis, intervention, or treatment. And sometimes patients don’t do as well as we would like, hope, or pray. And this takes a toll.

Most surgical departments throughout the world, including ours, hold a periodic conference known as the Morbidity and Mortality conference, or M&M. The purpose is, as a department of faculty, residents, and students, for us to look at the complications and deaths that occur on our service, and to examine what we could have done differently to prevent the outcome. The focus is to learn how we can prevent the same thing from happening again. This time helps us honor our patients and remember the gravity of what we do, and that is good. But there are times when the losses can almost overwhelm, and if we are not careful, they can become our focus, even to our own detriment.

This past year has been a difficult time for me for several reasons. One has been struggling with the constant loss we experience here as I continue to invest myself in caring for patients only to have them die despite my and our team’s best efforts. I have found this cycle of investment and loss to be one of the things that really impacts me in a deep way. Part of my nature as a surgeon is to remember the losses but to easily forget the wins. Maybe this is something we all struggle with.

Recently, as part of our M&M time, we did a reverse M&M, where, instead of looking at our bad outcomes, we looked at some good outcomes. We looked at times where because of diligent care and attention to detail, patients did well. And we gave glory to God for His healing in situations where healing shouldn’t have occurred. As simple and obvious as this practice of celebration and thankfulness may seem, I don’t think many of us practice it nearly enough.

A more experienced and wiser missionary once told Bob and me that every 6 months, we need to take time to reflect on the things that God has done. So, as we return to the States for a brief time of meeting with friends, family, and supporters, I just want to share with you a few patient stories where God has allowed us – Bob, me, our residents, the anesthetists, and the nursing staff – to be a part of His works, and where it feels encouraging and good to celebrate the wins.

Please note that each of the pictures are shared with the consent of the patient involved:

AK – She is a 16-year old patient who after seeing a lot of doctors came to Tenwek and was diagnosed with a specific kind of tumor that causes extremely high blood pressures (>200/100) and a fast heart rate. The tumor releases the same chemicals as if you were to see a lion right in front of you, but instead all the time without provocation. Usually, these tumors are located in a small gland that sits above the kidney, but hers was located right between the aorta and the inferior vena cava, the two largest blood vessels in the body. Further, it was big, and there was some concern it was attached to other organs. Not only is this a tough area of the body for the operating surgeon to work, it requires a diligent anesthetist, as with manipulation of the tumor, there can be huge changes in blood pressure, requiring various medications to stabilize the patient throughout the case. Bob and Sinkeet, one of our fourth-year residents, did an amazing job of resecting the tumor, and our anesthetists did a great job on their end. AK was able to leave the hospital on the fourth day after her surgery, off blood pressure medications, and feeling great!

RB – He is a 19-year-old man who had substantial trauma to his head. He was transferred quickly from a hospital 1.5 hours away only to arrive being unable to talk, move, or open his eyes. For medical people, his GCS was 3 (the lowest the scale of

evaluating someone’s alertness goes; comatose is 8). But, he had a complicated bleed in his brain that if alleviated there could be a small potential to have meaningful recovery. So, the team (Bob, Fridah, another of our fourth-year residents, and Kiniga, a second-year resident) decided to operate, understanding that his function may never return. To our surprise, his recovery was outstanding. By the time of his discharge from the hospital, he was giving high-fives and texting on his phone. 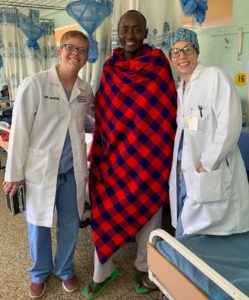 was unable to walk or extend his leg due to the pain.

We quickly realized his real problem was an aneurysm, or ballooning of the wall, of his aorta, that large blood vessel. We also realized that it was an aneurysm likely caused by infection and would require a very complicated surgical procedure. God had already arranged that a vascular surgeon, a good friend of ours from medical school, was coming in a quick enough time frame that we could wait for her arrival. She, Fridah, and I, were able to repair the aneurysm, which turned out to be caused by tuberculosis. He was able to leave the hospital one week after his operation and is looking forward to returning to his job as a ranger in Masaai Mara National Park.

MA – She is a 41-year old woman, who had several months of worsening yellowing of her eyes, or jaundice, found to be due to a tumor in her pancreas or the duct that drains the bile from her liver. Her workup didn’t show that the tumor had spread, but often we find that when we actually start the operation, there is spread of disease that our imaging was not able to detect that makes the cancer inoperable. This has happened a couple of times before, and in fact, I’ve never actually been able to complete this operation, known as a Whipple procedure. 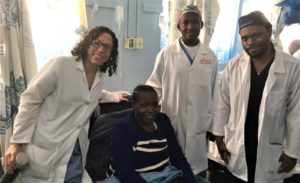 This again is a difficult operation, requiring removal of some of the intestine, part of the pancreas, and part of the bile drainage duct, and rerouting all of that in a different way. It necessitates careful surgical technique, as well as good anesthesia care and good postoperative care. Sinkeet and I were able to successfully complete the operation, for which we were incredibly grateful, given that she is so young. And further, she has done remarkably well postoperatively. She is now 12 days out from the operation and should be going home soon.

In each of these cases, each of the operating surgeons and residents understood his or her own limits as well as the difficulty and gravity of the cases with which we were dealing. Situations like this in our context require that we truly understand the need to rely on God as the author of life.

We fully realize that the definition of “good” is not how we feel at the end of the case or whether the patient goes home or the case is a success or whether the outcome is the one we prefer. We know and have seen that God uses even the outcomes that we would not have chosen. We are simply grateful for the gift that it is when God allows us to participate in His work.

But as human surgeons with human emotions, we find ourselves really hoping and praying for some times when we can see immediate results of healing. And when we can celebrate with patients and their families. And these past few weeks, God has given us the gift of outcomes that leave us encouraged and refreshed even in times of difficulty.