This is the second post in a series by MedSend CEO Rick Allen. Read the first post here: Medical Missions are Changing: How Fast Must We Move?

I heard God tell me that the things of the past were about to change – that I was to move faster and think bigger.

In 2011, I recognized that MedSend had been rescued from the 2008 economic downturn. Our generous donors rose to the call, and we increased donations to record levels. In order to better understand the dynamics of global healthcare missions, I went on what I called my “Global Listening Tour.”

The Holy Spirit Was Leading

I went to visit the leaders of our largest partners. I went to mission hospitals in several countries. I visited with influential thought leaders in the space. My goal was to see if there were common themes that I could discern, embrace, and respond to. One of my questions, among others, was “How is the Holy Spirit working through global healthcare missions today?”

Western missions have built up a significant healthcare infrastructure, including a large network of hospitals and clinics over the last 150 years.  One common theme that I saw was the goal of transferring authority and responsibility to national leadership of these assets in a timely and responsible manner.

I prayed through what I had heard. MedSend had been successful in its primary mission of enabling American healthcare missionaries to get into the world to serve. It became apparent, however, that we were having no impact where the Holy Spirit seemed to be moving, which was through national believers in the global south.

I spent a year looking at options where we might have a broader global impact, but most of them were dead ends.

I kept coming back to providing scholarships for medical school. But advisors warned me of the high risk of dropouts and the propensity of graduates to ignore high-need, low-resource areas.  The lure of higher salaries in government and private hospitals in urban areas, with access to greater resources, was great. One could hardly blame them.

But it was not always greed that motivated them.

I learned of the “Rich Uncle” syndrome. After someone graduates from medical school, the “uncle” who has paid for his primary, secondary, and college educations sits him down and says, “You are now the rich uncle. It is your responsibility to pay for the education and other expenses of your nieces, nephews, and cousins.”  They pass the baton of family financial responsibility. It made perfect sense why someone with good intentions to serve the poor in Christ’s name would go for the higher pay scales of the city.

The risks of providing scholarships for medical school were high.

Since its founding, MedSend had been paying for education that had already happened. We were 100% certain of the educational outcome: the healthcare professional had already graduated and was now willing to go and serve. If a grant recipient came back home, we returned their payment books, and they picked up payments where we left off. The model was simple, and expectations were clear. 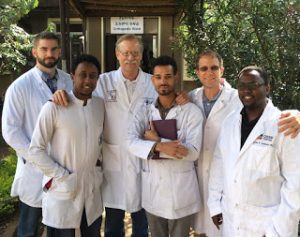 I learned that several of our grant recipients were training their national co-workers through the PAACS program (Pan-African Academy of Christian Surgeons). At the time, about 40 national doctors had been or were being trained in general surgery. It is one of the most needed skills in Africa. They confirmed that 100% of their graduates had stayed in low- resource, high-need areas after graduating.

This model caught my attention. It was what we were looking for.

I also became aware of the family medicine residency program that was run by In His Image. The IHI program is a loose affiliation of mission training hospitals that use IHI’s Christ-centered curriculum to train family practice doctors.

They were very different programs. PAACS was a high command-and-control model; if you wanted to be in their program, you conformed to their model. This type of structure was not unexpected in the area of surgery, where conformity and discipline are required – for good reason.

I believed that if we could build a program around these two very different models, we could learn our way to a successful method of assisting these and other training programs. After careful consideration, the MedSend Board agreed to a pilot program with both programs.

We now had everything needed to start the program: experienced partners, qualified national students, and a willing Board. The only thing missing was donors to fund the program. I was not certain that American donors would pay to educate African and Asian doctors. I had heard that Dr. David Topazian, the founder of MedSend, was told that the idea of MedSend was ridiculous. Donors would never pay for a doctor’s debt! His obedience to God and this idea has paid off. MedSend has now paid off more than $20,000,000 in educational debt for over 600 grant recipients.

Still, the insecurity around an unknown model crept in as we were rolling out the program. I must admit that I was surprised and delighted when we started to hear back from long-term MedSend donors. They said things like “It’s about time you went truly global” and  “This is an idea I can get behind,” among other encouraging comments. Good to their word, the money started to flow, and the first MedSend National Scholars were approved for scholarships.

The start was a bit bumpy. By the third year, we did not have enough funds to make all the payments. It took a year to catch up and get back on track. By year five, the program moved out of its “pilot” status. The MedSend Board approved the MedSend National Scholars Program to be an “official” part of the MedSend ministry. 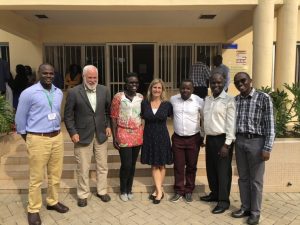 The first graduates of the program at Kabarak

We started with PAACS and IHI as partners.

Along the way, we also partnered with CURE – another program with a track record of success. As we learned our lessons and honed our program, one of our US grant recipients had the vision to start a family practice program at the hospital where she was deployed.

It was the first time we considered funding the participants in a “start-up.”

The three major requirements of a partner were in place. They were:

We believed that if our partners selected the appropriate young men and women, one day they would be training others, running hospitals, and influencing national practices and policies in the countries where they lived and worked.

We agreed to fund the entire inaugural class at Kabarak. It was the first time that MedSend was a catalyst for starting a new program. This month, in the middle of a global pandemic, we will see their tenth resident graduate.

How Do We Expand?

Since then, many of our current US grant recipients have picked up the banner and desire to start a program where they are located. Our partners are receiving regular calls asking for direction on what is required and how to get started. We see this as an opportunity to build a pipeline of future MedSend National Scholars. However, we recognize that these programs are on a small scale. If we hope to fund hundreds of national doctors a year, the infrastructure of mission training hospitals will need to change and expand.