Willy and Jessee Bustinza are medical missionaries serving in the state of Chihuahua, Mexico. They serve in a remote region there with their two young daughters, 3-year-old Lucy and 10-month-old Caroline.  The Bustinzas recently spent time with MedSend during our World Tour event in November, sharing about their experiences over the past year. At the time, they were recovering from COVID-19.

In her blog post ” Just Breathe: How We Faced COVID-19 as Patients and Physicians,” Jessee tells of their harrowing ordeal. Following is a condensed version of their story:

The COVID-19 outbreak in Chihuahua, Mexico is completely overwhelming the medical system. Hospitals are at 100% capacity, and people are dying in ambulances while waiting to be seen. Private hospitals require $30,000 US upfront to admit a patient with COVID. Families scramble to locate oxygen tanks for loved ones who can no longer breathe.

Rumors circulated earlier in the year about “el virus.” Some thought that it was a hoax and disease of the “chabochi” or white man. Others were fearful and believed that if they sought treatment, they would be punished.

Suspected cases had slowly trickled in since the pandemic began, but widespread infections weren’t seen in the area until after a large community event in October. Hundreds gathered for the quinceanera celebration of a community leaders’ daughter; shortly afterward, the small hospital began to see an influx of patients with respiratory symptoms.

The Bustinza family began to feel sick, too. Ten-month-old Caroline began vomiting and spiking fevers. Lucy lay on the couch coughing and didn’t want to play outside. Willy and Jessee initially tried to dismiss headaches and muscle pain as the result of a hectic week at the hospital. Finally, Jessee woke up with the sensation of knives stabbing her throat and discovered that her tonsils were infected. Although the mission hospital only had eight COVID PCR tests, the family knew it was time to test. A mission pilot flew their specimens to a lab in the city.

Other members of the hospital staff began to feel ill as well. With a skeleton staff, the hospital downsized operations to respond to emergencies only. Willy and Jessee’s family quarantined while they waited for the test results, which came back positive.

By the time his test results came back, Willy was on the recovery path. Donning full protective gear, he assumed care of the other affected staffers. 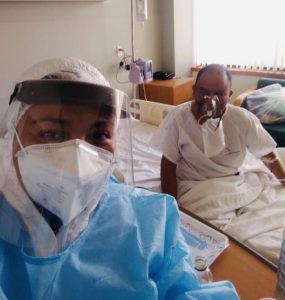 Dr. David and his wife, Alejandra

Two of the other staff doctors with COVID-19 at the mission hospital began to deteriorate. Both were beloved physicians who began to experience severe respiratory distress.

The first was Dr. David, an OB-GYN who served at the mission hospital with his wife, Alejandra. He developed multi-lobar pneumonia and was struggling to breathe. Willy and the hospital director were able to manage ambulance transportation to a nearby government hospital where Dr. David was able to make a recovery.

Alejandra wept with joy and told them, “I felt like David was given back to me from the dead.”

The second was Dr. Pedro, who became critically ill just a few days later. The hospital was already running out of key medications for COVID, and Dr. Pedro was requiring 10 liters of oxygen per minute to survive. They feared that he would not survive the night.

Miraculously, he did survive. The team learned of a bed available at a hospital that was an hour away by plane. This was great news, but the trip would not be easy for someone already suffering from respiratory distress. Dr. Pedro safely arrived at the hospital and has remained in their care. The staff is praying for his recovery.

The Right Place at the Right Time

Willy admitted that having to drop his friends off at COVID units has been one of the most emotionally draining experiences of his life. Jessee says that despite the challenges they have faced this fall,  she believes they are in “the right place at the right time.”

She left us with these words: “Perhaps the heavy headlines of today’s world have left you wondering how you can make a meaningful difference. Know that God has strategically positioned you in the ‘mission field’ you find yourself in, right now. Whether it’s by giving, praying, calling to check on someone, or just being present in their moment of need, God can use you as a vessel of hope to a hurting world.”

If you’d like to pray for the Bustinzas, Jessee asks that you consider the following prayer requests: