I first met Karin in September of 2012. We were doing an outreach in the slums. This outreach was focused on removal of jiggers (the parasite tunga penetrans), a little insect that burrows into the skin of the feet and lays eggs that become larvae and eventually more jiggers.

I noticed a woman and young girl sitting to the side of the mud building for several hours. As we were beginning to wrap up, I asked her if they needed help. The mom explained to me that she had heard there would be an American doctor present (I’m actually a nurse practitioner, but my patients often refer to me as their doctor). So she brought her daughter to be seen. She had been told that her daughter had a hole in her heart and needed to go to India for open heart surgery or she would die.

I did not even need a stethoscope to hear the murmur, it was so loud. It turned out that she was born with a hole between the two largest chambers of her heart. It was causing blood to back-flow and the heart to work harder and harder every year. The little girl was nine-years-old, and her name was Karin.  I didn’t even know where to begin but I took their contact information. I went home and started making phone calls and doing research.

Before long, I found out that Tenwek Mission Hospital in Bomet, Kenya, has an open-heart surgery program that runs several times each year when visiting doctors come from the USA. After making a few phone calls I discovered that in just two months the next team would be there. They could see Karin and the charge would only be several thousand dollars.

We began to pray, to share her story, and to watch God bring the funds in. In November we made the six-hour drive, with a very nervous Karin and her mother to Tenwek. After evaluating her, the doctors decided that she would be the first surgery that they would perform on that mission.

Karin woke up fighting. She is one strong little girl. As soon as she was off the ventilator and awake she began demanding water. She would alternate in Swahili and English calling out,

She figured with both languages being used, someone HAD to respond. When she was told by the nurses that it was too soon for water, this was her reply (translated from Swahili):

“You tell that doctor that he shouldn’t bother to check on me later because if you do not give me a drink of water, I shall just die right now.”

As I left the hospital that day, her mom took my hands and looked me in the eyes.

“I never imagined I would see Karin grow up or that she might give me grandchildren one day. This surgery has changed all of that. Now we have hope.” 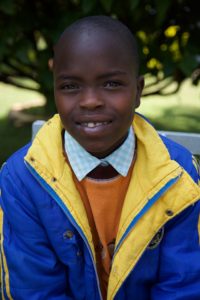 Fast forward to more than four years after I met her. We recently spent some time catching up to see how she is getting on. And I am pleased to report that Karin is doing beautifully. She loves Jesus, and she tells me that when she grows up she wants to be a doctor so she can help children with problems like hers.

She is a reminder to me that hope really does matter.