Stories of Hope: Hope for a Little One

A month ago I received an urgent page from the head nurse at Tenwek. A hospital was calling to send us a very sick newborn girl. She was only 2 kg and had been vomiting since she was born three days before. The transfer was arranged emergently.

On arrival to Tenwek, we found her to be quite ill. Gravely so. We emergently took her to theatre to find what we feared – over half of her small intestine was twisted and black. It needed to be removed. Had it been much more she would not be able to survive without very expensive nutrition through her IV – perhaps indefinitely. Something that doesn’t happen here in sub-Saharan Africa. Some places can manage short term treatment like that, but not long term. We have been striving to provide such short term treatment for little ones like this and we thought we might be able to do so for her. For a little while…

I Didn’t Expect Her to Survive

So we removed the dying intestine. But she was so sick we were worried she wouldn’t survive. We decided we would bring her back in two days (if she survived) to make sure no further intestine needed to be removed. Just before closing her little abdomen, I reached up with a finger to check her stomach and make sure the drain we placed through her nose was properly positioned inside the stomach to keep it decompressed after surgery. A routine thing. But instead of finding the tube as expected, I found her stomach was mostly dead.

Two-thirds of her stomach was falling apart. I quickly removed the portion that was affected and placed the tube inside the good portion that remained. Then I quickly sewed up the large hole where most of her stomach should have been. We placed a drainage catheter next to the repair and closed up her belly. I didn’t expect her to survive.

Amazingly she woke up right away after the operation and the anesthetist took out her breathing tube. She was vigorous and breathing well. I didn’t expect that. Newborns don’t usually wake up so well after something like this. So while the team prepared to move her to the nursery, I went to find mom. 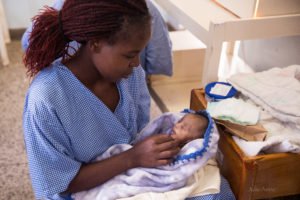 Mom Lillian with her baby daughter.

Mom was visibly relieved when I told her that her daughter was alive. She hugged her mom who was with her. But then I needed to tell her the huge battle her child was facing. Her face showed her understanding. I tried to share the struggle while preserving some hope. But I had very little and I think mom could tell. Her daughter’s name was Tracy.

The next two days are a bit of a blur for me. I checked on Tracy frequently. My wife and I and our daughter prayed for her. Our friends in NY prayed with their daughters. Each time I checked, she was doing well. I had hope that maybe God would spare her little life.

Friday came and we operated again. A small amount of intestine needed to be removed but in general, things looked very good. We decided her best chance was to reconnect her intestine (a D3 to mid-small bowel anastomosis for those medically inclined). Amazingly she woke up right away again as soon as we were finished. Her characteristically strong cry gave me hope. Maybe God would spare her little life. 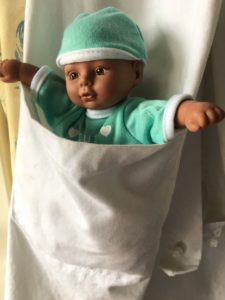 A doll for Tracy.

The next day she continued to do well. I met with mom and we prayed together for Tracy. We had done all that we could in the operating room. Now we needed her to recover and for her intestines to start working so we could feed her.

Friends of our had sent some little dolls to us for kids in the hospital. Their daughters had used their own money to buy the dolls. They asked if Tracy could get one. So I walked one up to the ward where her mom was staying. All the ladies crowded around as I gave it to her and shared how some girls in the USA had sent it for her daughter. Even now they were praying for her. She was clearly touched by their love for her and Tracy.

Now she needed TPN. TPN or total parenteral nutrition is a way to feed people through their IV into their blood directly. It’s expensive and rarely available in our region of the world. But I had been working on a way to do so here at Tenwek for some months. I thought we had a workable solution. We were keeping a small amount in stock for cases like this. But the small supply we had expired a few days before. It would take a bit of time to obtain more. Finally, after some challenges, it came. We were able to start giving it to her right away. She had lost some weight in the meantime, but she was doing really well. Just no signs of her intestines working yet.

Slowly over the next week, Tracy started to recover some of her weight. And signs that her intestines were starting to work began. So we continued to pray.

A special x-ray was done to make sure her stomach had healed before putting any food into it. The first one had a tiny abnormality that made me nervous there was a small leaking area. So we waited a few days and repeated it. Now it looked perfect. But really small.

Our next hurdle was to see if her remaining intestine would be of sufficient length to support her nutritional needs. It should, but with her small stomach, I wasn’t 100% sure. We started to give some of mom’s breast milk down the tube into her stomach. Just a tiny amount. But she did great. So slowly over the next several days we increased the amount of milk and decreased the amount of TPN through her IV. Amazingly she didn’t show any signs of trouble – either with her small stomach or with her lack of intestinal length. God was being gracious to Tracy. And her mom. She was completely being fed by mom now. I was amazed.

A Young Life with Hope

I shared with our medical staff one morning how God had spared Tracy’s life. And how he used our team at Tenwek to do so. I am so grateful for all of the effort our team has put into saving her life. And I am so grateful that God has been gracious and has allowed our efforts to be successful. She is just one little girl among so many that we couldn’t save. But I am grateful for her. She is one that God has allowed us to save. A young life with hope. Her mom’s daughter. Tracy.

Tracy has struggled a bit in being able to drink milk. So her feeding tube is still in her nose allowing mom to continue feeding her while we work on her ability to drink. I’m in the capital today and will purchase a bottle to try. People don’t use baby bottles in our region much so it’s harder to come by. Perhaps it will help. Please pray for Tracy as she continues to struggle. And for her mom. And for the many infants and children that we work so hard to care for. May they see the love of Jesus in our care. And may they find hope for this life – as well as the next. 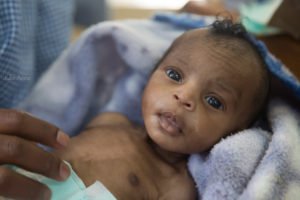