“Blessed be the God and Father of our Lord Jesus Christ. Because of his great mercy, he has given us new birth into a living hope through the resurrection of Jesus Christ from the dead and into an inheritance that is imperishable, undefiled, and unfading, kept in heaven for you.”

Yes, the disciple who passionately followed Christ, who promised he would never deny him, then, under pressure, caved, only for the rooster crowing to remind him of his failure.

Yes, Peter was passionate to the point his passion got him in trouble some of the time.  Remember in the Garden when they came for His Lord and he cut off the ear of one of the solders? His passion compelled him to action, and even more so after the resurrection.

Can you imagine living in Peter’s post-resurrection world? He was living during the time of the Roman emperor Nero, who was known for his persecution of Christians with some of the most brutal persecution known to man.  Peter no doubt had witnessed his friends, fellow followers of Christ, be put to death in horrible ways.  Yet, in his post-resurrection world, something had changed within Peter.  No longer was fear of death or persecution something that would cause him to deny Christ. No, only after witnessing the resurrection of His Lord was he willing to follow him, even to the point of death, to share the living hope that is available for all who believe.

Perhaps today you find yourself in a state of isolation due to COVID-19.  You may be concerned about family members who have been diagnosed or exposed, or perhaps, even yourself. Even worse, you may know someone who has lost their life due to the virus. You may know healthcare workers, government employees, first responders, or others who are on the front lines facing this crisis, like many of our MedSend grant recipients, who are rising up to meet this giant in highly under-resourced settings.  Let’s look at a lesson from Peter on how we can have hope, even in the most difficult of times:

Who:  1:Peter 1:1:  “To fellow believers in Exile.” It’s likely Peter’s audience is highly isolated.  They have been forced from their homes mostly due to persecution. Like Peter, they have watched their friends and family members persecuted and killed because of their faith in Christ. Scholars tell us that this letter was likely intended to be circulated between the scattered churches and read aloud, as many could not read. What do you think Peter’s audience felt?

Fear:  Of possible persecution or death of themselves or family members

Loneliness:  Isolated from other family members and friends and forced from what had been normal life

Passion: About the new hope they had found in the promise of the Resurrection

What is it that Peter is saying is available:  Living Hope

Have you ever hoped for something?  A new item of clothing for Easter Sunday, a new car, jewelry or some other desirable thing?  We often use the term “hope” in this way.  Most of the time we could substitute the word “wish” in the place of hope.

We wish for this thing or that thing.  Our wish may or may not come true…nevertheless, we wish. But, in almost every case when the word hope is mentioned in the new testament in the post-resurrection world it has the idea of something that can be grasped or obtained.  Not a wish for something that may, or may not be, but something that will be attained.

Peter tells the fellow believers of his day that there is a living hope that has ALREADY been given to them.  They can live without fear. They can live in a world that is filled with difficulty because they know they have living hope beyond the current life’s situation.

Why can we have this kind of hope: “Because of God’s great mercy”

This is not the first time our world has found itself in a place where those who would spread fear of death are highly active.  A friend of mine recently shared these words written by C.S. Lewis 72 years ago regarding the “atomic bomb”.  Just replace “atomic bomb” with “coronavirus” as you read it:

In other words, do not let us begin by exaggerating the novelty of our situation. Believe me, dear sir or madam, you and all whom you love were already sentenced to death before the atomic bomb was invented: and quite a high percentage of us were going to die in unpleasant ways. We had, indeed, one very great advantage over our ancestors—anesthetics; but we have that still. It is perfectly ridiculous to go about whimpering and drawing long faces because the scientists have added one more chance of painful and premature death to a world which already bristled with such chances and in which death itself was not a chance at all, but a certainty.

This is the first point to be made: and the first action to be taken is to pull ourselves together. If we are all going to be destroyed by an atomic bomb, let that bomb when it comes find us doing sensible and human things—praying, working, teaching, reading, listening to music, bathing the children, playing tennis, chatting to our friends over a pint and a game of darts—not huddled together like frightened sheep and thinking about bombs. They may break our bodies (a microbe can do that) but they need not dominate our minds.”

How can this be possible: “Through the resurrection of Jesus Christ from the dead”

As we approach Easter Sunday, the most celebrated event for Christian believers, let us take time to remember that the hope of all hopes is the promise of eternal life that can only be offered because of the resurrection of Christ. Our hope is that because Christ rose, we too have the hope of the resurrection. Of eternal life and an inheritance in heaven. Peter goes on to say in verse 6 that we can rejoice in this hope, even though we may have a period of suffering. The hope that is to come far outweighs the suffering of the present day.

As you look toward Easter Sunday, I pray you will take some time to think beyond the suffering of the present day and find hope in the promise of the resurrection.  While the coronavirus and fear are highly contagious, so is hope! And, like Peter, let our passion propel us to share the good news of this hope with others.

Consider taking a moment to listen to the song, Living Hope, by Phil Wickham 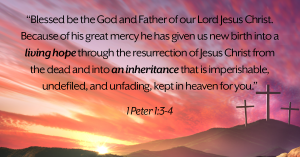