The beginning of the new year is symbolic of many things: A fresh start. A clean slate. A time to reflect, renew, and resolve to do better. In this context, we give the word “new” a positive connotation.  As 2020 showed us, just because it was a new year, it didn’t mean that it would necessarily be better.

But the decision to follow Christ – and become new in Him – is always a good one. 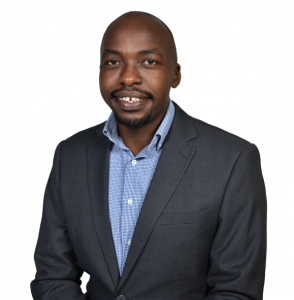 Dr. Stephen Thigu, one of MedSend’s newest National Scholars studying at Kabarak University, found a completely new direction for his life after coming to Christ in his teens.

Stephen grew up in Kenya in a home that modeled Christian values. He regularly attended Sunday School and catechism classes, but did not come to faith until he was 15 years old. After attending a Bible study offered by a Navigator’s Missionary, he realized that he was a “slave to sin and desperately hopeless without Christ.”

“I was lost when Christ found me,” he says. “I fit the description of 1 Corinthians 1:26-30: a selfish, unwise ignoble person on a fast lane highway to destruction.”

But Jesus changed his perspective, he says.

“I no longer live to accumulate things for my enjoyment. Instead, I have experienced the greatest joy in glorifying God,” says Stephen.

With his perspective altered, Stephen began to see his future changing.

His father had a job as a medical records officer at Kenyatta Hospital. Through his visits to his dad at work, Stephen saw medicine as a noble profession that provided an opportunity to serve others.

He read the book “Don’t Waste Your Life,” by John Piper, just after reading about the need for medical missionaries within Africa.  He decided that becoming a doctor and devoting his life to mission work would be the best way to share God’s love.

Stephen worked hard in school and received both Bachelors of Medicine and Surgery degrees in 2018. During his final year of medical school, he felt an affirming call to Family Medicine. His hope is “to be a catalyst in health promotion and disease prevention” for all members of the family.

“My mission in life is to know God truly and make Him known. In the coming years, I hope to be used by God to impact people through wholesome healing of body, soul, and Spirit,” Stephen says. “I live by faith that God has great plans to make my life meaningful.”

Because of the generosity of our donors, MedSend National Scholars like Stephen Thigu will be able to further their medical – and evangelical – training, making a lasting impact in their home countries.