Dr. Dan Galat is a US-based orthopaedic surgeon who works to support, educate, and train national surgeons for service in Africa. He served for over 10 years in Kenya and was involved in the launch of the orthopaedic training program at Tenwek Hospital there. He’s recently moved back to the United States and will be based here for his new  role as the Orthopaedics Program Administrator with PAACS (Pan-African Academy of Christian Surgeons). He’s also a MedSend Alumnus and provides leadership and guidance to our MedSend National Scholars Program. 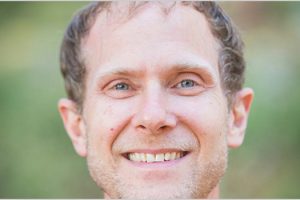 Dr. Dan Galat could have easily ended up as Pastor Dan Galat.

Back in 1996, he was a seminary student at Trinity Evangelical Divinity School in Chicago. In pursuit of a full-time pastoral role, he was unable to shake the idea of somehow incorporating medicine into his ministry. A pre-med major in college, he had a passion for medicine but thought that God was calling him to something more. After hearing MedSend founder Dr. Dave Topazian speak at an event hosted by Dan’s brother, he discovered that there was an option that would allow him to combine his passions: medical missions.

After discovering this new avenue that seemed to be a perfect fit – and feeling “released” by God to pursue it – Dan changed course. He was accepted at The Ohio State University and began his medical schooling there after completing seminary. Originally thinking that he might specialize in General Surgery, Dan changed his mind quickly once he began his rotation in orthopaedics. After five years of residency training, he was ready to begin work as a medical missionary.

A Wild, Epic Adventure in Africa 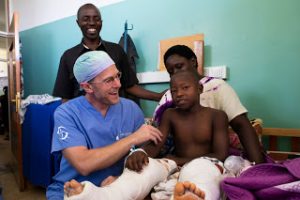 By the time he finished his orthopaedic surgical training in 2008, Dan and his wife Heather had four children. The couple had made a commitment together, before Dan even went to medical school, to pursue long-term medical missions. They did not know where they would serve and prayed that God would open a door for them.

They received an email from Tenwek Hospital about the need for an orthopaedic surgeon. “Through a series of miraculous events,” says Dan, ” we moved our family of four kids to Kenya for one amazing, wild, epic adventure.”

“It was an incredible time,” he says.

Dan describes Tenwek as being in a rural area with a massive population density: over 8 million people in a 50 km radius. “For a period of time, I was the only orthopaedic surgeon taking care of all these people,” he says. “It was just, frankly, overwhelming.”

During his first term at Tenwek, Dan says he saw over a thousand cases. Most were the result of road traffic accidents because of the expansion of motorcycles, taxis, and other types of transportation in Kenya.

God surprised him with his answer. Dan had one plan for God to follow in providing that help; God had another.

“I really didn’t realize how God would answer that and how incredibly He would do it,” he admits. “I was thinking of other missionaries coming in to help me, but what He had in mind was instead raising up national missionaries to do the work and to join the partnership.” 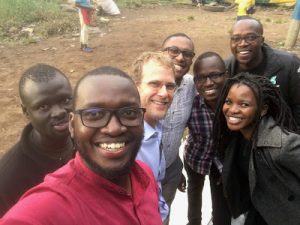 At the time, PAACS also had a vision for raising up and training national surgeons in Africa. They had been working to do this since 1996, but they were focusing on General Surgery only. Dan approached them about the need for a focused training in the area of orthopaedics.

He recalls saying, “What if we started an arm of training in PAACS that was for training orthopaedic residents?” He says he met with a little resistance at first. He eventually received the go-ahead to start the PAACS Orthopaedic Training Program at Tenwek Hospital.

At first, only three interviewees showed up for the two positions that they opened. “But, it was a start,” he says.

They began training in 2014 and eventually expanded the program to include residents at Kijabe Hospital and Soddo Christian Hospital. “By God’s grace, we have more than 20 nationals residents in training, specializing in orthopaedics,” Dan says.

After spending ten years in Kenya, Dan has moved his family back to the United States. He now works in private practice with a like-minded partner in Shane Martin. Shane has been on short-term mission trips to Africa and shares Dan’s goal of stewarding their skills and resources to advance God’s kingdom through orthopaedic surgery.

He hasn’t left his work in Africa behind, however. Dan remains with World Gospel Mission as a U.S. based “global worker.” Now, he serves as PAACS’ Orthopaedics Program Administrator. He is providing direction, encouragement, recruitment and support for three PAACS ortho sites and its more than 20 residents.  And, he’ll continue spending time onsite in Africa for several weeks each year.

He remains passionate about continuing to serve and develop the program. “God is still working in a powerful way through Christian medical missions,” he says adamantly. “There’s no question. The era is not done.” 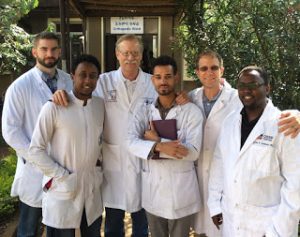 Dan Galat met MedSend founder Dave Topazian early in the life of MedSend. Just beginning to grow the ministry, Dave had found that educational debt was one of the biggest obstacles facing would-be Christian missionaries. He devoted the rest of his career to building a ministry that would help to alleviate this burden on them.

When Dan was ready to go into the mission field, MedSend awarded him a four-year grant which paid his student loans during his time of service. Dan wasn’t ready to come home after four years, and MedSend happily renewed his grant. Today, as a MedSend alumnus, he works with both MedSend and PAACS to continue to support and develop new medical missionaries.

“I was able to do missions very clearly and very strongly because of MedSend,” Dan says. “I was able to go directly from residency training to Kenya, and I couldn’t have done it – and I know many people couldn’t actually pull the trigger to go overseas for an extended period of time – if not for the ministry and help from MedSend. I was able to serve because of MedSend for so many years, so I want to say thank you to y’all for that!”

After receiving his own grant, Dan now has the pleasure of working directly with other MedSend grant recipients. Many of the residents in training at Tenwek, Kijabe, and Soddo Christian Hospitals are MedSend National Scholars. He is thankful for the support that MedSend donors have provided to the nationals in Kenya.

To MedSend donors, Dan says,”Just know that the funds that you are giving, specifically to the MedSend Nationals Program… it’s the real deal. It’s not something you need to be concerned about or think, ‘oh, I wonder if this is going towards the right thing.’ In my mind, this is it. ”

We think Dan Galat is the real deal too. Praise God for this good and faithful servant!

Hear Dan tell the amazing story of a boy who healed from two broken femur bones in the video below: