Dr. Geoffrey sees patients in a newly-constructed hut, which served as a clinic.

During our August “Meet the Grant Recipients” monthly webinar, MedSend had the privilege of interviewing medical missionary “Geoffrey M.”

Geoffrey is a MedSend grant recipient who has been serving in West Africa since 2019. He and his wife Nicole came back to the United States several months ago to deliver their fourth child. Now they have a healthy baby boy and are awaiting the opportunity to return and continue their mission work.

During our time together, Geoffrey opened up about his journey as a missionary and life in Africa.

Molded from a Young Age

Geoffrey says that it is easy to look back at his life and see how God was molding him to be a missionary.

His father immigrated from Africa as an adult. Geoffrey grew up hearing stories about the horrors of ongoing civil wars. Hearing of this dark other world was weighty and impacted him profoundly as a young boy.

As he grew older, Geoffrey came to several conclusions. First, he decided that he would pursue a degree in medicine. Second, he would offer his life to God in service of the Gospel. And, he always knew he wanted to go to Africa. 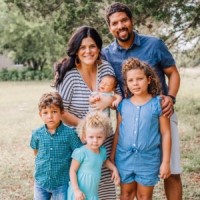 While in medical school, Geoffrey found that his ambitions were not the same as those of the other students.  Motivated solely by his desire to serve others, he was aware that he had a different calling than most. Geoffrey’s ambition to serve Christ fueled him to complete his rigorous studies.

During his last year of school, Geoffrey met Nicole, his now-wife. Both drawn to the idea of serving the Lord through missions, their very first conversation was about serving in Africa. At the time, Geoffrey couldn’t help but think: “Could she be the one that goes with me?”

Many years and four children later, Geoffrey and Nicole have become partners in serving together in West Africa.

The culture in Western Africa is harsh to the Gospel.

In the region where Geoffrey serves, many people engage in witchcraft or practice Islam. He says that the people are quite “externally motivated,” constantly praying, chanting, and sacrificing in hopes of receiving something in return for their efforts.

Such beliefs lend themselves to several horrid practices — including female genital mutilation. Over 90% of women under the age of 49 still undergo this procedure in his region. Geoffrey’s own grandmother was deeply entrenched in the culture of witchcraft that perpetuates this practice. He hopes to use this familial connection to be a strong public advocate against this gruesome practice.

And yet the Gospel is still taking root even in such rocky soil. Geoffrey tells stories of entire villages burning every artifact of witchcraft  once “Christ has entered the place.”

The Message “Must Be Important” 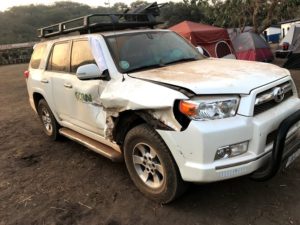 Geoffrey’s truck after hitting a tree in the jungle

In our interview, Geoffrey told of a particularly dangerous and nerve-wracking journey to a remote village.

Driving through the jungle at nighttime, they had an accident and ran into a tree. Everyone was okay ( including a pregnant Nicole), but the truck sustained visible minor damage.

Upon arrival, a local chief told an audience of Muslim locals that they should listen to what Geoffrey had to say. He told them “It must be important –  look what they are doing just to get themselves out here.”

Geoffrey is grateful that God honored this treacherous visit and allowed it to be fruitful for the Kingdom.

Caring for Physical and Spiritual Needs 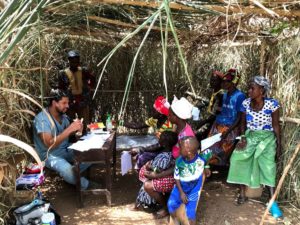 The clinic – a hut specially built for Geoffrey’s visit

When it comes to providing healthcare to these rural villages, Geoffrey says that it’s often him “or no one.” It may be years before the villagers encounter another doctor.

Geoffrey remarks that “healthcare is a very valuable and needed service, but it is not a replacement for spiritual ministry.” His primary goal is always to bring the good news of Christ to these people. Geoffrey vows to continue to minister to those that he treats.

Geoffrey is grateful for the bold prayers of his supporters, the guidance of the Holy Spirit, and the assistance of MedSend. He hopes to continue to “further the Gospel in the dark areas still under the stronghold of witchcraft and Islam” when he returns.

To help support grant recipients like Geoffrey, please join MedSend in providing Hope… for Such a Time as This.