Dr. Sara Phipps says that if you asked her back in college (during the ’90s) if she would someday be a missionary, she would have said you were crazy. As a new believer back then, she was just beginning to learn how to “live like a Christian.” She knew she wanted to make a difference in the world but had no idea how her story was going to play out.

During veterinary school, a professor encouraged and “pushed” her to go on a short-term mission trip to Paraguay. She describes the trip as being completely out of her comfort zone but “defining” for her. She felt called to missions after just that one trip. Unable to go straight into long-term missions at the time, she decided to do as many short-term trips as she could. Over the years, she has been to Venezuela, Vietnam, Costa Rica, Uganda, Haiti, and Bolivia. Once the youngest of her six children entered college, the timing was finally right for Sara to pursue her decades-long dream of full-time missions.

Today, she serves with Christian Veterinary Mission at a teaching hospital/ animal clinic in Bolivia. Currently home on furlough, she recently spent some time with us and told us a little about her ministry there. 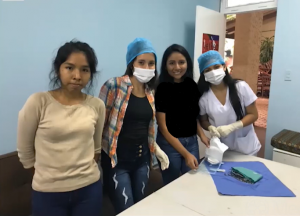 Sara describes Bolivia as being one of the poorest countries in the Western Hemisphere. It is difficult to procure supplies needed, both for general living as well as for the animal hospital. The curriculum being taught at the vet school resembled what might have been found in the United States sixty years ago. The country is a socialist one, and the average veterinarian there might make the same wages as someone selling clothes in the marketplace.

Catholicism is the most recognized religion there, but there’s a twist: Sara says that religious practices are merged with worship and sacrifices to Incan mythological figures like Pachamama (Mother Earth) and Uncle Tio (the Lord of the Underworld).  Besides Catholicism, there is an evangelical church movement which she describes as being very legalistic.

The students that Sara teaches have expressed confusion when it comes to their religious choices. Often, they have rejected both the Catholic and evangelical offerings. The concept of relationship, not religion, is a foreign one to them. Through her involvement in their student ministry, Bible studies, and countryside outreach programs, Sara is introducing the Gospel to an inquisitive young generation. 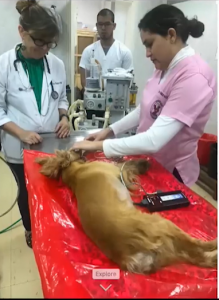 Before the pandemic began, Sara enjoyed a nice working relationship with her peers at the veterinary clinic. Her co-workers welcomed her and enjoyed their relationship with Christian Veterinary Mission. Essentially, however, they told her that they were not interested in hearing the Gospel from her.

When the pandemic began, Sara and her husband began to host Zoom sessions for the group. They focused on English and Bible study. Two of the previously indifferent colleagues began to attend consistently and even asked for the group’s prayers.

“One of the positive outcomes of the pandemic is that they were all in quarantine, and there wasn’t a lot to do,” Sara says. “They were able to put more time into their relationships with Christ. It became a really great opportunity for us to share the love of Christ with some of the people that maybe just didn’t have the time to do a Bible study,” she says. “Nothing like a pandemic to change your perspective!”

“You Just Serve Where You Are” 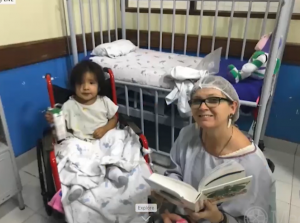 Before her veterinary mission in Bolivia could begin, Sara needed to spend eight months in a local language school. She became involved in a local church there and was asked to minister to children in a burn unit. “I’m not a kid person, I’m an animal person. I don’t do children very well, so God has a sense of humor,” she laughs. (We did mention Sara’s six kids, right?)

She spent time reading Bible stories in Spanish to the children there and developed a special bond with a little girl named Anna.  She shared the Gospel with Anna’s family during their stay. After being released from the hospital after many months, Anna and her family needed a ride home. Sara and her husband drove them. They enjoyed their visit, reading and singing and playing.

The lesson was not lost on Sara. “It was just a really wonderful experience,” she says. “It just made me realize – you just serve where you are. I wasn’t doing veterinary medicine, which I love. But, God told us to go visit a hospital… I think part of your calling is that you do what you can where you are. Maybe even if you think… I’m not doing doctor work. I’m not doing what I came here to do. You just do whatever God puts in front of you, and you can really bless others.”

Sara said that the MedSend grant was a determining factor in allowing her to commit to long-term missions. “I would not be here without it,” she says.

Sara has discovered that the cost of living for a missionary, even in a third-world country, is much higher than she ever imagined. Raising support money for just that is hard, she says. She says that the grant to pay on the student loan obligations has been a blessing.

“It’s just meant the world. We would not be able to do this without the MedSend grant,” she says.

Hear about Sara’s call to the mission field here: