Stories of Hope: Miracle at Kijabe

On my first day of work at Kijabe Hospital, I met a 20-year-old patient named Samuel, who had been involved in a terrible motorcycle accident resulting in a fractured spine.  When he first presented to Kijabe (one week after the accident), Samuel was completely paralyzed from the abdomen down, without any motor and minimal sensory function in his lower extremities.  One of my new partners, Dr. Muchiri, had performed a procedure so that the patient could at least mobilize to a wheelchair.  When I first met him, more than two weeks from his initial injury, Samuel was recovering from his surgery, and physiotherapy was beginning to work with him, teaching him how to live as a person with a new, permanent spinal cord injury.

A New Way of Life

Samuel’s affect was quite flat when I first met him, no doubt secondary to the realization that he would never walk again.  Spinal cord injuries in Kenya are at best, significantly challenging (as there are no disability provisions or laws in Kenya) and at worst, a “death sentence” (as patients, neglected by family and friends, often succumb to pneumonia, infected bedsores, or urinary tract infections).

My heart went out to Samuel as I was examined his legs, confirming that he was indeed paralyzed.

After my examination, I offered to pray for him, and he readily accepted.  I prayed simply that God would meet him in a meaningful way, and that he would be able to function well with his new condition.

Upon returning from a 3-day trip to Singapore for an orthopedic training course, while rounding on patients in the morning, the team came to Samuel’s beside, and he was beaming.

“Anything new with Samuel,” I asked, hoping that he had gotten his wheelchair, and was progressing on schedule with therapy.

“Yes,” said Dr. Otido, rather dispassionately.  “He started walking about three days ago.”

“What?” I said, looking searchingly at the team, entirely puzzled, as I had never seen, nor heard of a patient who made a complete recovery more than two weeks after such a spinal cord injury.

Bewildered, I went to Samuel’s bedside to examine him myself.  I couldn’t believe what I was seeing… he had full sensation in both extremities and was moving his legs, feet, and toes as if he had never been injured (all the while smiling broadly).

No Explanation… No Surprise

I looked back at the team, and said, “This is a complete miracle!  There is no other way to explain this medically!”

Now Dr. Okello was the one looking puzzled.

“Daktari, you know…these things happen at mission hospitals,” he replied. 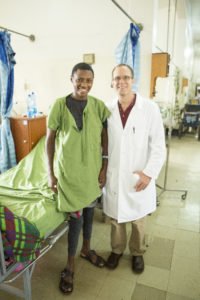 “Indeed,” I said, still amazed that I had witnessed a modern day miracle.

Later, I came to Samuel, and encouraged him with the truth that Jesus had heard our prayers and healed him.  He fully agreed and affirmed that he was a believer, a member of the Presbyterian Church in Kenya.

As I have processed Samuel’s case (myself and with other physicians), I am convinced that we have been privileged to witness a true miracle.  There is absolutely no way to explain it medically.

While recovery after such spinal cord injuries can occur, it is usually minimal (e.g. slight improvement in sensation by a level or two), especially in those who have demonstrated almost complete neurologic deficit for an extended period of time after initial injury.

But should I be so surprised?

Is anything too difficult for the One who, in perfect wisdom, created something as complex as the spinal cord?

Surely, “Who is like you, Lord God Almighty? You Lord, are mighty, and your faithfulness surrounds you.” Psalm 89:8.