The World Health Organization has designated 2020 as The Year of the Nurse. A third of all MedSend grant recipients are nurses, and we join the WHO in honoring them for their service. We recently had the privilege of chatting with Pediatric Nurse Amie Bockstahler, currently serving in Guatemala. Amie was a delight to speak with and shared many stories from the mission field there. 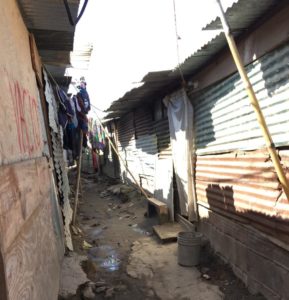 Guatemala is very much still a third-world developing country, says Amie. “In the capital city…there’s a huge difference between the rich and the poor. There’s the rich rich and then there’s the poor poor, and there’s not much in the middle. We’re working with the poor poor.”

The clinic where Amie works – Corazon de Amor –  is just outside the “garbage dump community,” a collection of dwellings constructed around the local dump.

“People… go into the garbage dump to scavenge through the garbage to find either items to live off or items to sell or recycle,” she explains. The makeshift homes have no running water; the bathrooms in the community are all shared.

“It’s a difficult place,” she admits. ” Kind of a hopeless area where there’s a lot of violence, a lot of gangs, and life is just really hard for people in these areas.”

It’s just the kind of community that needs to hear about the love of Christ. 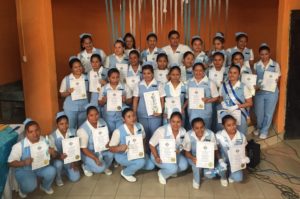 Despite the circumstances that she sees on a daily basis, Amie speaks with enthusiasm and joy when she describes her work there. One area that has brought her particular joy has been her involvement in training a new generation.

“A really fun part here is being able to train other nursing students,” she says. For the past three years, Amie has gotten to help with a program that trains nursing assistants. Once they complete the program, the new graduates can work in a hospital, much like nurses in the US.

Since Amie has been involved, the program has graduated around 60 nurses who will continue to serve within Guatemala.

Sadly, the program was not offered this year, due to COVID-19. Amie still took the opportunity to encourage and support three students in her community who continued training and working at her clinic. “It’s been really neat to be a part of their journey and to see their desire to keep learning and continue in their studies,” she says. 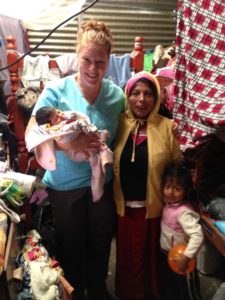 Although the stories of hardship come on a daily basis at the clinic in Guatemala, one particular patient’s situation weighed especially heavily on Amie’s heart several years ago.

She began caring for a woman named Anna, who was pregnant for the sixth time. Anna lived in the garbage dump community and was already struggling to care for her first five children. After she gave birth, she told one of the doctors at the clinic that she was going to try to sell the baby.

Amie remembers thinking, “What kind of life or future will she have if she’s sold to a stranger?” The prospect of the baby being sold deeply affected her, and she began to pray for the whole family.

The team at the clinic put together some supplies for the family, and Amie went to visit them at their home. “It’s shocking to go into some of these homes, just to see the conditions that they’re living in,” she admits. “But, at the same time, it just felt like it would be better to be with her family than to be sold to a stranger.”

Amie prayed with Anna and encouraged her, and she continued to bring supplies. At another home visit after a month, Amie was pleased to learn that the baby had been named Ashley. It was a sign that Anna had decided to keep her and accept her into her family.

Amie has continued to be involved in the family’s lives. Anna has become a Christian and is connected to a local church. Her kids attend a program that teaches them Bible verses.

It Can Be Overwhelming 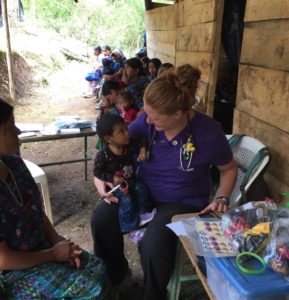 When we asked Amie what else she thought we should know, she shared a prayer request along with some words of gratitude.

Her prayer request was for wisdom.

“It’s hard to know how to meet the needs here. There are so many. Sometimes it’s a little overwhelming,”Amie says. She wanted us to know that she truly appreciates prayers for wisdom in meeting and serving the needs of the people of Guatemala.

She is thankful for all who have made it possible for her to serve.

Hear an excerpt from our Zoom session with Amie, as she describes the community that she serves in Guatemala.