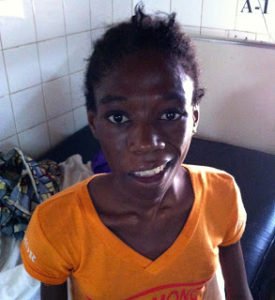 Abiba, a 15-year-old orphaned Muslim girl, along with her aunt and cousin, arrived at HBB in mid-January.  From a small village 3 hours north of the hospital, they heard about HBB from a mobile médical team that had gone to their village.  When Abiba developed a mass in her abdomen, they knew HBB was where they should go.

Abiba’s initial assessment and diagnostic testing indicated she had an ovarian tumor requiring surgery.  Once in the operating room, the surgeon found that her abdomen was actually full of metastatic cancer.  A large tumor was removed and sent out to a Michigan pathologist who processes our spécimens for free.

After the surgery, one of our full-time missionaries along with one of our chaplains met with Abiba and her family members.  They gently, yet thoroughly explained the seriousness of her prognosis, metastatic ovarian cancer, that would soon take her life.  They were also able to share the gospel and pray with the family.  Over the next few days the chaplain continued to lovingly share the Love and message of Jesus Christ and before she was discharged home, Abiba, her aunt and cousin placed their trust in Christ.

When Abiba returned home she was met by a local pastor who had been contacted by the hospital chaplain.  Too weak to go to church, the church came to her, discipled her and ministered to her needs.  Four weeks later the pathology report was sent to HBB, indicating that Abiba had Burkitt Lymphoma—an aggressive, yet treatable cancer.  Since the family had no phone, the pastor was contacted and sent to tell the family she must quickly return to HBB for treatment.  After several days, when there was still no sign of her at the hospital, the pastor was called once again.  Returning to Abiba’s family, he discovered that they had no money to return to HBB for médical care.  When we heard of this, money was quickly donated to cover the transportation and médical expense to treat Abiba.

She got wheeled into the hospital as a pile of skin and bones.   I knew that she was likely too sick to start chemotherapy treatment, but it was also her only chance of survival.  Everything was explained to Abiba and her aunt and treatment were started. 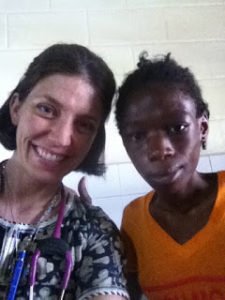 Surviving the first round of treatments was a great encouragement to everyone.  It was a joy to see her smile and be able to pray and encourage her in her new faith in Christ.  Unfortunately, when it came time for round two, she did not show up to the hospital.  Once again, the pastor was contacted and donations were given to transport Abiba to the hospital—this time alone.   Her aunt could not come due to another sick member of the family and the decision was made for the hospital to temporarily “adopt” Abiba.   She stayed with a well-known woman at our “cuisine” and money for food was donated.  On days that she was strong enough, she eagerly asked to go to church services.  She became a part of our hospital family.

Sadly, after her third cycle of chemotherapy, she became very weak and had signs that the cancer was advancing despite our best efforts.  Her family was notified to come to see her if they wanted to say good-bye.  Our chaplains discussed her condition to her, making sure that she knew that God loved her and that a lack of healing was not because of her lack of faith, nor a lack of Love on the part of Christ.  He loved her fully and completely and she would soon be spending her days in the arms of her Savior.

The day after her family arrived, they decided to take her home.  She was not fully conscious and very weak.  I kissed her on the forehead and prayed softly with her as her ailing body lay across the taxi.  As I cried I told her family that I was sorry, but that I was crying for myself and my loss and not hers—for she would be meeting her Savior today.  Our Chaplain, Pastor Jeremy, then prayed with the family members and they left.

We received word later that day that Abiba had gone to be with the Lord during the journey home.  And while my heart ached for the loss, the Holy Spirit reminded me that he had done great work in her and allowed her to live long enough to experience the Love of Jesus Christ alongside a family of believers.

Pray that her life and testimony continue to work in the lives of her family.

Rejoice that the Lord’s work is being accomplished here in Togo through HBB.

Praise God that His Word and Truth bring Hope to a world in need!

The sting of death is sin, and the power of sin is the law. But thanks be to God, who gives us the victory through our Lord Jesus Christ.

*Thanks to Donna Larson for her contributions to this blog.