The Hope of The Christmas Star

“And suddenly there was with the angel a multitude of the heavenly host praising God and saying: “Glory to God in the highest, and on earth peace, goodwill toward men!”

Tonight, when we look up into the night sky, we may be able to witness the “Great Conjunction of 2020.” Jupiter and Saturn will draw closer together tonight than they have in over 800 years, forming a bright star-like light just after nightfall.

Less scientifically, this solar event is being referred to as an appearance of “The Christmas Star,” because of a belief that the Star of Bethlehem could have been the result of the planetary conjunction of Mars and Venus. It will be beautiful to see.

God can show off His beauty in the night sky however and whenever he chooses. He chose to use a bright, beautiful star to lead the Wise Men to the manger in Bethlehem over 2000 years ago. It was a time of turbulence when that star appeared; Jesus was born into a land of political unrest and revolutionary crisis.

But the star above the manger signified a reason for Hope. 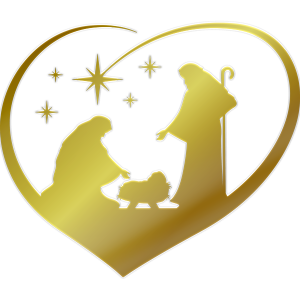 The past year has also been full of political unrest, and we’ve experienced the crisis of a global pandemic. Could the world use a symbol of hope yet again? Could the Creator of the Universe be reminding us of the hope that the beautiful light in the sky represents?

In an article for Crosswalk, writer Hope Bolinger says, “In the same way the Christmas star lit the pathway for the Magi to find our Savior, we can use the star as an illustration for those who don’t yet know Jesus. We can explain to our non-believing friends and family members about the events that took place the night of Jesus’ birth when they talk about the bright ‘star’ in the night sky.”

As believers, we can take comfort in knowing that we know the source of that light, the giver of Hope, the Reason for the Season: Jesus.

He is the light of the world, and we never tire of working for His glory.

We have a unique opportunity to help share the love of Christ through compassionate, Christian healthcare. We continue to lift up our MedSend grant recipients as they live and work in the poorest areas on the planet, all in His name. And we lift up those of you who support the mission of MedSend. We are doing incredible things together for the Kingdom.

Enjoy the beautiful “Christmas Star” in the sky tonight, and rejoice in the everlasting Hope that it represents!